Fleet and Bridge Street in Swindon were traditionally ‘pub’ areas that attracted a vibrant night time economy. The closure of a couple of these premises had prompted a slow decline in the area, resulting in a number of unsightly units that were distinctly unattractive to new tenants. The BID was keen to revitalise the area, and show it off as the attractive ‘go to’ place for eating and drinking, which would, in turn, lure in new businesses.

In addition, the town was busily celebrating its unique railway heritage with ‘Swindon 175’, and were quite keen to incorporate some promotion of this into the Virtual Window dressing.

We wanted to create something individual that recognised the potential of each of the four units. The largest (Ellingtons) had been secured with unattractive blank steel panels, which certainly discouraged forced entry, but did nothing to aid the appearance of this pivotally positioned property. Added to that, the fascia was broken and somewhat hazardous. We removed the fascia, and gave the outside a spruce up, including a new coat of paint. We then installed 3D images over the blank panels to replicate a sophisticated virtual art gallery using wonderful railway pictures from the ‘Steams’ library to celebrate the arrival of the steam train all those years ago.

Another of the properties (The Broadwalk) had been abandoned for some time, but with the vibrant virtual bistro restaurant that we installed on the outside, we are confident that its fortunes will soon improve.

Recognising the young ‘vibe’ that this area attracts, our vintage virtual record store ‘Vinyl Tap’ transformed the old Chinese restaurant (Yindu). And finally, the BID had seen a virtual deli in our portfolio of recent installations and were keen to raise the demographic and variety of their real and virtual offerings, so over the abandoned furniture store (Warmsley’s) we created a virtual deli bursting with delicious treats.

The BID were delighted to have the area looking instantly more lively and exciting. We turned a number of run down shops that were discouraging footfall into something that will no doubt stimulate interest from potential tenants. As Di Powell, inSwindon BID manager, said; ‘We are pleased to…make this impressive change to an area which has a fantastic future ahead of it’. Meanwhile Councillor Garry Perkins, Swindon Borough Council cabinet member for economy, regeneration and skills, responded; “The shops have transformed the area and work towards the regeneration process. I think it appeals to the aspect of the town’s sense of humour as well. It’s good that we have something in the town that can make people laugh as well as looking attractive when people walk down Bridge Street.

The Virtual Shops certainly got the public talking too. Shweta Garg, 29, of Farrier’s Close, said: “This is amazing to me, it really stands out and it’s a really unique idea to bring something like this to Bridge Street. It makes a difference to how you feel when you walk along here. I think it’s a good idea.” Toni Brack of Walcot echoed this perception; ‘I think it’s really good, it made me stop and look and it’s nice to actually have something to look at there instead of boarded up shops. It’s brought about some much needed change to the area and I hope it continues.’ 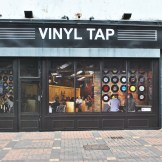 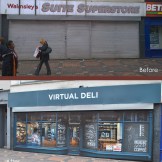 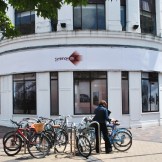